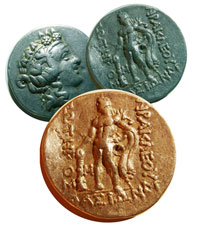 It is by now well known that the Supreme Council of Ethnic Hellenes (YSEE) is the organization representing the Hellenic Ethnic Religion and not a political organization or party. For this reason it doesn't get involved in political arguments nor does it partake in public debates stemming from pseudo-ideological polarities such as left - right wing politics, communism - fascism, nationalism - internationalism.

In matters of major national importance, though, like the one about the name of our neighboring country of Skopje, we are obligated to present the historical aspects of the issue, calmly and prudently, contributing in a solution that will not harm our national interests nor will it undermine our territorial integrity and the welfare of our future generations.

There can be no debate about the Hellenic identity of the Macedonians simply because the widespread Hellenization of the known world for at least two centuries after the death of Alexander the Great had the Macedonians at the forefront. This fact is well documented by numerous historical sources as well as innumerable archaeological finds. Thus any attempt to discuss the national character of the Macedonians under any pretenses and by anyone is by default at least suspicious.

The geographic area, that the whole debate is about, was named by the Romans as Macedonia Secunda, after their conquest; in the same way they named the entire Peloponnese as Achaea despite the fact that this was especially insulting to the Spartans. This was done as a purely administrative choice of a name for the wider area of modern day Skopje, in a time when the Slavs were nowhere near the Balkan Peninsula.

In the 19th century CE, while the Ottoman Empire was collapsing the Orthodox Russians after the treaty of San Stefano in 1878, provocatively pushed the creation of a Greater Bulgaria aiming to control the entire Balkan Peninsula and the temperate waters of the Mediterranean. In this Greater Bulgaria they incorporated areas of Macedonia that belong today to Greece as well as areas that belong to Skopje and Bulgaria. In all of these newly annexed areas preexisted strong and vibrant Greek communities. With the consent of the Turks they created the Bulgarian Exarchate in opposition to the Patriarchate and caused strife in the population of the area, because those that followed the Exarchate were considered automatically Bulgarian while those that remained with the Patriarchate were thought to be Greeks. The Patriarchate of New Rome and more so the Church of Greece which had its own shortsighted interests, equated Hellenic identity to Orthodoxy, in an effort to retain its influence on the populations of the area, managed to intensify the conflicts by considering as Greeks only those that followed the Patriarchate.

It was during this time that the ideological construct of "Macedonianism" which posits that the Macedonians are not Greeks, first appeared and the dialect of the bilingual Macedonians was dubbed "Macedonian" language.

Even after the Macedonian guerrilla clashes (1904-1908), the Balkan Wars and the final border agreement with the Treaty of Bucharest in 1913, the issue is continuously brought up at various times.

Before the Second World War, when the powerless Communist Party of Greece decided to become a member of the Communist International their Bulgarian and Yugoslavian counterparts demanded as requirement for its inclusion, to declare its agreement for the creation of an independent communist state with the name Macedonia which it would had incorporated the entire Northern Greece.

At the end of the Second World War the communist Yugoslavia was formed and Tito gave the name Macedonia to the southern part of his country that until then it was known as Vardaska. Tito was hoping that in the future a chance will present itself for the borders of his country to reach all the way to the Aegean Sea.

Unfortunately at the same time, Greece was embroiled in a bloody civil war, during which all governments were besieging the western powers for their support in the conflict. These western powers were unwilling to displease Tito and Yugoslavia in expectation that he will break his relations with Moscow that were not as cordial as other communist states. For this reason the Greek governments never officially complained while the international community was well aware that Tito by using the name Macedonia was aiming at the creation of a "Macedonia of the Aegean".

It was during this period that the myth of the ancestry of the people of Skopje from Alexander the Great was first created together with irredentist ideas that have unfortunately become the prevailing ideology with which several generations have been brought up. During the 1990's when Yugoslavia was being partitioned the rhetoric from Skopje, with support from the United States, developed a very aggressive character. The United States saw Skopje and the geopolitical space as a chance for further strategic control of the Balkans.

On the Greek side, the all-powerful Orthodox Church, still trapped in the mentality that Greeks are only those that identify as Orthodox, became part of the problem and further blurred the issue by organizing massive protests. Having wide coverage and unlimited access to the Greek media it supplanted the Greek state in the eyes of the Greek people. This is the same church for which the Roman Catholic Greeks of southern Italy, the Muslim Pontians of the Black sea and the Kalash of Pakistan are not part of the Greek Nation. Its rhetoric on the subject has nothing to do with any sensibility for the promotion and protection of Hellenism (which was always hostile to) but rather it is wasted in shows aimed for internal consumption and the creation of a wider political sphere of influence.

As for the Greek State, its government and most of its political parties, the sediment is that even a solution with a geographical qualifier that includes the name Macedonia will suffice as long as the matter is settled in a timely manner. This dismisses people of Hellenic ancestry that still inhabit Skopje and more blatantly ignores the anti-Hellenic propaganda and irredentist attitudes that certain circles coordinate that ceaselessly claim that the capital of Skopje is Thessalonica.

If the people of Skopje feel Macedonians they are automatically Hellenes and the only realistic solution to the issue will be the bilateral and peaceful unification of Skopje to Greece. If on the other hand they do not want to be Greeks and do not wish to be part of a unified state then let them chose a name that does not insult History, logic, and the aesthetic sensibilities of educated people around the world.

Considering the present circumstances the acceptance of any name with the geographical, temporal, or any other prefix that uses the name Macedonia (Northern, Upper, New , Slavo- etc) does not solve the problem but rather complicates it and postpones for the future any real solution with many negative consequences